This talk focuses on material culture within prisoner of war (POW) camps in the European Theatre during WWII and the links it presents to the past. In order to explore this I will discuss the role of inventing objects within camps.

POW memoir literature speaks extensively of innovation and invention within camps. Due to conditions prisoners lacked many of the objects they would possess in their civilian lives, this lead to the reinvention of stoves, heaters and other items. A grandfather clock was created from KLIM tins, a pair of scissors and springs from a major’s helmet; radios were made from anything that could be found, held together with candle wax; and stove burners were regularly updated and improved, one POW talks of competitions and displays of the most effective models. Necessity was not the only stimulus for invention, boredom and coping strategies also played a part in the motivation for reinvention of engines, musical instruments and carvings. 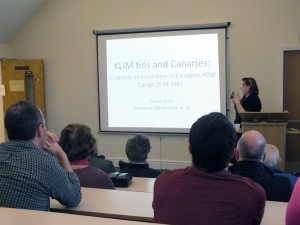